The Armenian Church commemorates events and individuals significant in our spiritual lives with days dedicated to Feasts.  The purpose of these celebrations is to awaken our spirituality by remembering and reflecting on the significance of the events and rededicating ourselves toward spiritual strengthening.

There are five major feast days of the Armenian Apostolic Church in the liturgical calendar.  Of these significant days, only Christmas has a fixed date, the other days are changeable.

Holy Nativity and Theophany of Our Lord Jesus Christ 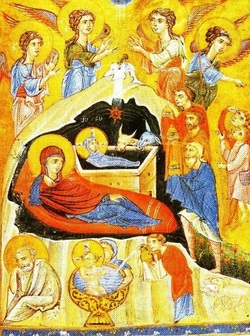 The Holy Nativity is the blessed birth of our Lord Jesus Christ which took place in a humble manger in Bethlehem. [Gospel reading Luke 2:1-20]

The Theophany of our Lord Jesus Christ is the revelation of God when John the Baptist baptised Jesus in the River Jordan. [Gospel reading Mark 3:13-17]

The Holy Nativity and Theophany are celebrated together on January 6. The reason for this double celebration is that at Christ’s baptism, He was revealed as God and Saviour. The voice of the Father and appearance of the Holy Spirit in dove-form was likewise a revelation of the Holy Trinity (Father, Son and Holy Spirit) and the one Godhead.

Until about the second half of the 2nd century, in both the East and the West, the Baptism of Christ was held in pre-eminence above all celebrations even over the that of the Birth of Our Lord.  It was in the same period that a need arose in the West to separate the Feast of the Birth from Theophany by celebrating the former on December 25. This was also designed to discourage Christians from partaking in a major pagan festival on that day. This custom eventually became accepted in the East as well – particularly in Jerusalem where it was difficult to celebrate Christ’s birth in Bethlehem and His baptism at the River Jordan on the same day. Therefore, by the end of the 4th century, all churches were celebrating Christ’s birth on December 25, with the exception of the Armenian Church which did not feel the need to deviate from the ancient canon.

Feast of the Glorious Resurrection of Our Lord Jesus Christ 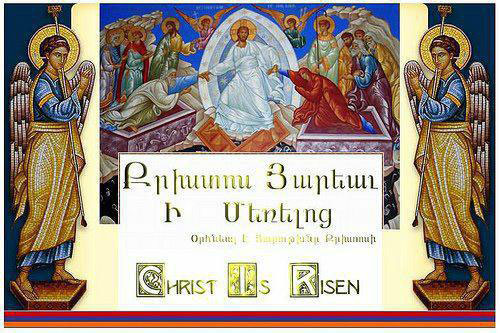 The first three days of Holy Week are not dedicated to any particular observance. Holy Thursday, known as Maundy Thursday, is the celebration of the Passover sacrifice and the Last Supper which established the sacrament of Holy Communion.  The ceremony of the ritual of the “Washing of the Feet” also takes place on Holy Thursday which showed Jesus humility and servant attitude as example for his followers.  [Gospel reading John 13:1-30]

On Holy Friday, a morning service is performed to remember the betrayal and Crucifixion of Christ followed in the afternoon by the Burial service which recalls Christ’s body taken down from the cross and placed in the tomb. [Gospel reading John 18-19]

Holy Saturday is Easter Eve (Jurakalooytz) and it is customary to celebrate the eve of feast days by lighting candles in the church (Candlemass). The Divine Liturgy is celebrated in the Armenian Church on Easter Eve as well as on Christmas Eve.

Transfiguration of Our Lord Jesus Christ

This feast is also referred to as Baydzaragerbootyoun because of Christ’s luminous appearance.  In Armenia it is also known as Vartavar – Festival of Roses – after the old pagan feast, which it replaced.

The feast marks Christ’s brilliant appearance to three of His disciples, Peter, John, and James, on the holy mountain of Galilee, also known as Mount Tabor. [Gospel reading Matthew 17:1-13]

Assumption of the Holy Mother of God 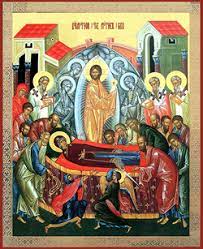 Tradition states that after the Ascension of Jesus, Mary Mother-of-God was cared for by the Apostle John and lived in Jerusalem a further 15 years. When she passed away all the apostles except Bartholomew, who was away at the time, conducted her funeral at a cave-like tomb in the Garden of Gethsemane.  When Bartholomew returned, he wished to see Mary one last time and convinced the Apostles to open the tomb.

Upon opening the tomb, Mary’s body could not be found and angels’ voices were heard for three days and nights. They interpreted this as a sign that our Lord had assumed (taken up) His Mother into heaven as He had promised her. They found the empty tomb a confirmation of that promise for she had not been dead but had fallen asleep.

Feast of the Exaltation of the Holy Cross

The Holy Cross is recognised as the symbol of salvation for all Christians from as early as the time of the Apostles.

The Exaltation, known as Khachverats in Armenian, is connected with several historical events, each of which involves the “raising up” or glorification of the cross.  An early tradition identifies St James, the brother of the Lord and the first bishop of Jerusalem as the first to exalt a cross. Taking in hand a likeness (or perhaps an actual piece) of the original cross of the Crucifixion, St James elevated it before the people, and venerated it as a symbol of the power of God.

The term “saint” was reserved for those who lived a virtuous life, those renowned for their faith and service to the church, those who were martyred for the faith, and those worthy of heavenly favour.

There are two categories of saints in the Armenian Church: those who are “celebrated” and those who are “commemorated”.  The former are celebrated by means of recollection during the Divine Liturgy and the latter by the daily reading of their biographies and/or martyrdom from the Haysmavoork (The Book of Martyrologies and Lives of the Saints). There are also saints who remain unknown for that reason the church celebrates “All Saints Day”. 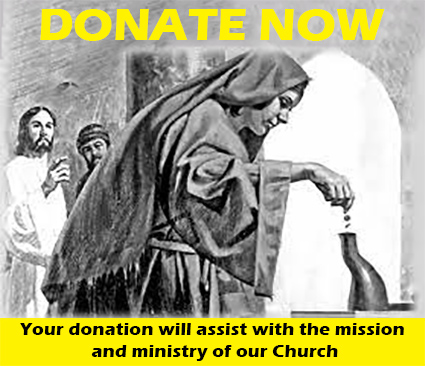