Vessels are particular items and linens that are used on the holy table (Altar) and in the church for the celebration of the Divine Liturgy.

Tasdarag (Sudarium) is a fine linen used to hold sacred objects during the Liturgy and at other times. It is used to show the sacredness of the object held, and that holy things should be held clean of sinful contact.

Dzadzgots (Veil) is a square embroidered linen or other fine material, to cover the chalice and the paten completely from top to base. The veil symbolises the hidden mystery of the Sacrament of Communion.

Gorpoora (Corporal) is a square linen or other material, usually white on which the chalice is placed during the Liturgy. Representing the shroud in which our Lord’s body was wrapped at his burial.

Tashginag (Towel) is an oblong piece of linen, sometimes hung on the Kodi of the priest at the right side, and sometimes carried with the ewer [tall vessel containing water for hand-washing], for the purpose of drying the hands of the Celebrant after ablutions during the Liturgy. It indicates spiritual cleanliness.

Goozh or Gonk (Ewer/Basin or Bowl) are vessels used for washing the Priest’s hands during and at the end of the Liturgy. Washing is symbolical of spiritual cleansing.

Mas (Antidoron) is very thin unleavened bread of wheat, of any reasonable size making it possible to be baked on a metal tray. It can be made by any member of the congregation. It is often used after being softened by spraying water on it. It is distributed after the Liturgy to those of the congregation who have not received communion. Mas symbolises the bond of love among the members of the church.

Nshkhar (Wafer) which means “a fraction” is the bread prepared for holy communion. It is a small thin loaf, made of unleavened dough of pure wheat and without salt. It should be stamped so as to have the figures of the crucifix and of ears of wheat and a cluster of grapes in relief, and baked just short of getting brown. It is a single loaf in token of the church and of the One Lord Jesus Christ (1Corinthians 10:17). It is unleavened, symbolising the purity of the Faith.

Maghzma (Paten) is a small round tray, from one to two inches wider in diameter than the mouth of the chalice and made so as not to slide away from the top of the chalice, upon which it is placed.

Jajanch (Ostensorium, “Radiance”) is a round or oval disc of silver, surrounded by rays of metal, and fixed on a stem and base. Sometimes a relic is placed in the centre of the disc, which is always carved or decorated with various sacred signs or figures. It is often used simply as an ornament on the Altar, symbolising the spiritual power radiating from holy things.

Gantegh (Lamp) These are glass bowls, sometimes of different colours, suspended by three chains and hung from the ceiling in the Church. The bowls, in which olive oil is burnt, are often placed on large and finely wrought holders of precious metal, serving as ornaments. A lamp should always be hung over the Main Altar, and it should remain perpetually lighted, if possible. Lamps symbolise the divine light enlightening the world.

Badger (Image or Picture) No statues in any form are allowed in the Armenian Church, and in the Armenian Church unlike other oriental churches, icons are always oil paintings on canvas.  They should be few in the church and should represent the divine figures or saints or sacred events. On the Main Altar there should always be the Theotokos [a title of Mary, the mother of Jesus], seated on a throne with Child Jesus on her knees or in her arms on her left, holding a sceptre in her right hand. There is often a globe on the knee of the Child Jesus with a cross on it, and the right hand of Jesus is in a blessing position. Pictures are venerated in the Church as vehicles of spiritual discernment.

Poorvar (Censer) is a silver incense burner, in the shape of a bowl, which is suspended by chains connected to a small disc holding them. The bowl rests on a firm base, and has a perforated cone-shaped lid. Three of the chains hold the bowl, and a fourth is connected to the top of the lid in order to lift it. The lid could be decorative in the shape of the dome of an Armenian Church. The censer symbolises the human soul, in which the spiritual fire burns its worldly desires and sends up its prayers to God as a pleasing fragrance.

Sgih (Chalice) is a semi-spherical gold-plated silver cup on a stem and base. The cup must be of such a shape that could allow the wafer to be easily immersed in the wine for the offering of Holy Communion by the Celebrant. 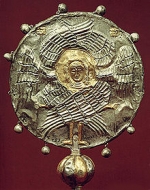 Kshots (Fan or Flabellum) is a disc of silver, about eight or nine inches in diameter, with the figure of a six-winged cherub made on each side of it in relief and with little ball-shaped bells, often twelve in number, attached all round the rim of the disc. The fans were usually used to drive flies or other insects away from the cup. They also symbolized cherubs driving evil spirits away from the sacred place. It is now used decoratively, as a musical instrument and with the like symbolism.

Ashdanag (Candlestick) can be of various sizes and forms. There should be twelve candlesticks on the gradins [steps] of the Altar and two on the Altar itself. Two large and tall candlesticks should stand on either side of the Bema. Candlesticks represent the saints, who uphold Christ’s light enlightening the world. 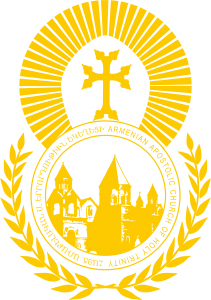